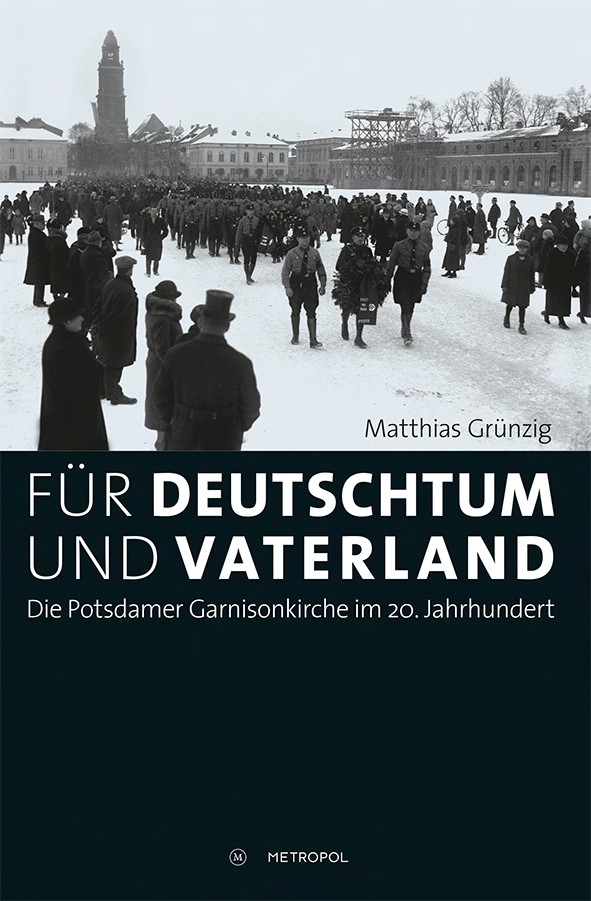 Für Deutschtum und Vaterland is an unusual and unusually important book. Its author, Matthias Grünzig, is a journalist, but the meticulous and resourceful research makes the book a significant contribution to historical scholarship. Its topic is the past—specifically the history of the Garrison Church in Potsdam from the end of World War I to its final demolition in Walter Ulbricht’s German Democratic Republic—but it constitutes a major intervention into recent debates over plans to rebuild the Garrison Church. As an activist effort, the book cannot be judged a success: Grünzig’s introduction is dated “March 2017,” and construction at the site officially began at the end of October 2017. But as a work of scholarship—if the goal of “scholarship” is to inform, enlighten, surprise, and inspire critical reflection—it succeeds brilliantly. Anyone who cares about the history of Christianity, the German past, church-military relations, the architecture of Potsdam, or the politics of public memory should read this book.

Grünzig’s central question is about a building. What was the place of Potsdam’s Garrison Church in twentieth-century Germany? His answer is striking and sobering. Over a fifty-year period, the Garrison Church was the site of nationalist, National Socialist, military, and militaristic activity. Members of the congregation from Imperial Germany to the last days of Hitler’s regime loudly supported those causes, and the Protestant clergy, many of them military chaplains or veterans, promoted them from the pulpit. The church building was the site of memorials, rallies, processions, and ceremonies—to commemorate the Battle of Sedan, to mourn ten years since the signing of the Treaty of Versailles, to honor the anniversary of the death of Friedrich II, and to bless the banners of the Hitler Youth. It was both a symbol of an aggressive Fatherland and itself a force in creating and empowering that version of Germany.

Among the shocks in the discussion of the Weimar Republic is the extent to which the Garrison Church was a hotbed of support not only for the DNVP (German National People’s Party) but for the NSDAP (National Socialist German Workers Party). Military chaplains, left over from World War I, stirred up trouble, and anti-democratic activists intimidated members of the congregation who did not share their views. In April 1932, even before Hitler became Chancellor, the church opened its doors, or at least its doorway, to a torchlight parade of SS, Stormtroopers, and Nazi Party members.

Anyone with even superficial knowledge of Hitler’s rise to power is familiar with the photograph of the Chancellor bowing over the hand of President Hindenburg in front of the Garrison Church. Grünzig’s presentation of the so-called Day of Potsdam shows much more. He reveals an astonishing amount of stage managing, not only by Goebbels, as one would expect, but by General Superintendent Otto Dibelius, who actively lobbied for the Garrison Church to play a key role in legitimating the new regime. No detail was too minor to merit lavish attention. The Garrison Church earned the dubious distinction of being the only Protestant church where Hitler himself spoke from the pulpit.

That inauspicious beginning set the tone for the Nazi period. After rearmament in 1935, Wehrmacht chaplains enjoyed a prominent place in the life of the church. Also notable was the appeal of the Garrison Church as a pilgrimage site both for Germans and for international visitors. Italian dignitaries were frequent visitors, and friendly luminaries also showed up from Hungary, Slovakia, and Japan, along with humbler travellers, including representatives of the League of German Girls from Romania. Grünzig provides a tantalizing list of concerts at the venue: works by Verdi, Bach, Brahms, Haydn, and others were performed there, as was Mozart’s Requiem in November 1944, all part of the ways Christianity and “culture” worked together at the church to legitimate Nazi rule and support Nazi German warfare. A Sunday service with a special performance by the Music Corps of Military District III was scheduled for April 15, 1945, but Royal Air Force bombs the evening before put an end to that.

Yet even in the form of ruins, and long after defeat and division of Germany, the Garrison Church remained a troublesome site. The final section of Grünzig’s book surveys the decades after the war, with an emphasis on the 1960s. He focuses in particular on one question: did East German leader Walter Ulbricht order the building torn down? Although widely accepted, this claim, Grünzig demonstrates, is false. He does not develop the implications of that finding, but it certainly weakens one of the arguments advanced or implied by some advocates of rebuilding: that restoring the prominent place of the historic Garrison Church, with its 90-meter steeple, to the Potsdam city-scape represents the triumph of re-Christianization after destruction of East German Communism.

The straightforward, unadorned style of Grünzig’s book is contrasted by the ostentatious website of the Wiederaufbau Garnison Kirche Potsdam (Reconstruction of the German Church in Potsdam). “We create space to remember history,” the Guiding Idea promises. Visitors can track progress of reconstruction on a webcam or make a donation to restore a building described as “national silverware.” The historian Manfred Gailus, one of the editors of this journal, has suggested calling the church something else. If it must be rebuilt, he wants it named after Friedrich Weißler. Beaten to death by a guard at Sachsenhausen in 1936, Weißler has become known as the “first martyr of the Confessing Church.” He was not killed because of his church politics, however, but because he was born Jewish. Grünzig does not address Gailus’s suggestion, nor does he directly engage the contemporary debate at all. Nevertheless, his patient, detailed, and relentless account speaks for itself: any efforts toward peace and reconciliation associated with the building, the site, or the name of the Potsdamer Garnisonkirche will carry the indelible stain of its history. Honoring Friedrich Weißler’s memory would not erase that stain but, like Grünzig’s book, it would be a meaningful acknowledgment.