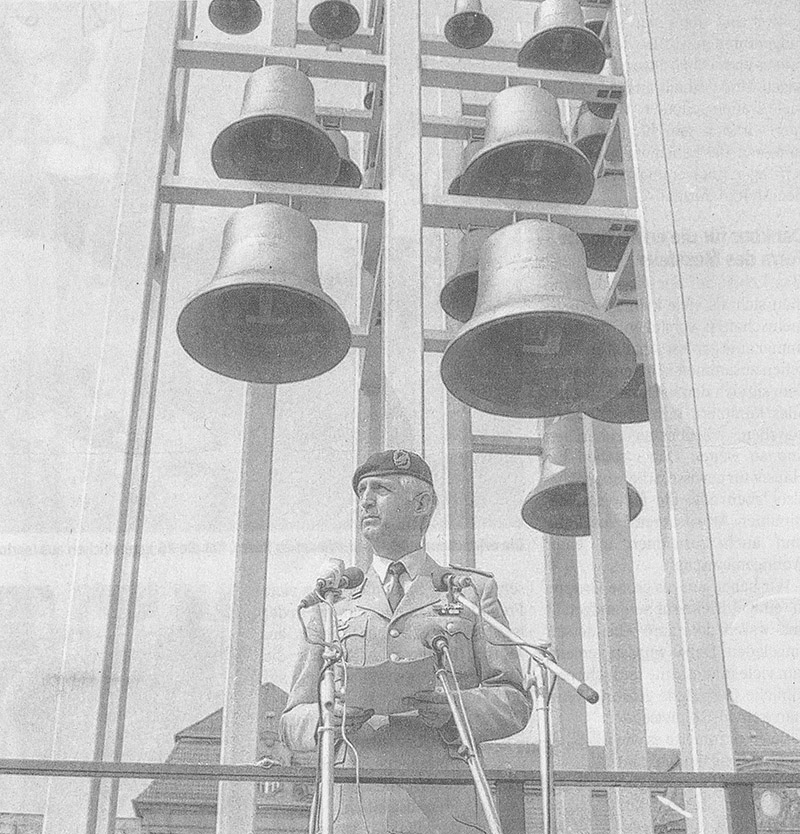 The (later) right-wing extremist Bundeswehr officer Max Klaar gives a speech in front of 10,000 guests at the inauguration of the reconstructed carillon in Potsdam in April 1991

Since 2017, the Garrison Church in Potsdam, southwest of Berlin, has undergone reconstruction with federal funds under the patronage of Federal President Frank-Walter Steinmeier. The Garrison Church is a symbol of Prussian militarism and since 1919 a symbolic location for German nationalistic, antidemocratic right-wing forces. Commissioned by the King of Prussia, built between 1730 and 1735, and greatly damaged during an air raid in World War II, the military church was demolished in 1968. In an unholy alliance of church, military and state, not only did countless services for the Potsdam regiment take place there, but it was also the final resting place of Prussian kings Frederick William I and Frederick II. During Weimar, the church became a charged meeting place for anti-democratic, nationalistic, militaristic and radical right-wing groups – for all those who fought the republic from the outset, invoking the spirit of Potsdam against that of Weimar.

Tapping into this same tradition, the church was used to stage the constitutive meeting of the German parliament, the Reichstag, after the Nazis seized power in March 1933, marked by a symbolic handshake between Reich President Paul von Hindenburg and Adolf Hitler – an event later mythologized as the ‘Day of Potsdam’. The church featured heavily in Nazi iconography: its image was reproduced 80 million times on 2- and 5-mark coins, and the melody of its bells and carillon played between programmes on the nationwide radio network run by Josef Goebbels.

In 1984, at a barracks in Iserlohn, West Germany, Max Klaar – an army officer later designated ‘extreme right-wing’ by the Federal Defence Ministry – founded the Potsdam Glockenspiel Tradition Society, an association to campaign for the rebuilding of the church. The association reconstructed the carillon, and after the fall of the Berlin Wall, presented it as a gift to the City of Potsdam.

The historically revisionist dedications on seven bells to Germany’s former eastern territories (territories that were were given up as part of the Potsdam Agreement) were secretly removed by the city authorities, but its dedications to militaristic and far-right organizations remain intact to this day. Although his revisionist and far-right views were publicly known, Klaar’s reconstruction campaign was actually supported by political and religious figures over many years. However, they did not want to leave it to him to build and operate the church.

In 2001, the Protestant Church presented its first rebuilding proposal (under the title ‘The Spirit of Change’), sparking a dispute by linking the church’s Prussian heritage with an explicit break: the spire of the otherwise faithfully reconstructed church would be topped not with the Prussian eagle and sun but with a Cross of Nails from Coventry, alluding to the International Centre for Reconciliation in Coventry, UK, a nonviolence organization.

Klaar and his fellow campaigners successfully resisted such a break. For instance, the former German army officer Burkhart Franck was an influential figure in the campaigns to recreate both the carillon and the church. He published an article in 2010 in the Preussische Allgemeine Zeitung, the right-leaning official weekly newspaper of the association representing those expelled from East Prussia after WWII. Franck reported that he had ‘dissuaded the church from the idea of an International Centre for Reconciliation’ and ‘prevented the installation of a Cross of Nails on the church’s spire’.

From the outset, the project has been criticized by religious and community initiatives that have organized demonstrations and other events. But unlike the case of the reconstruction of the Hohenzollern palace in Berlin, the Potsdam project has not yet been the subject of a broader, national discussion. Yet its critics remain vocal and the planned donation-based funding has failed to materialize, causing the church and state to step in. Faced with these rising costs, the federal authorities have pledged to increase their subsidy from 12 to 18 million euros. The tower of the church is already in construction. there is not yet sufficient money to finalize it, not to speak of the nave, which is also intended to be reconstructed in the medium term.

Now, well-known artists, architects, conservationists, academics, clerics, cultural figures and representatives of civil society have addressed an open letter to the politicians responsible for the project – Federal President Steinmeier, Secretary of State for Culture Monika Grütters, Minister President of Brandenburg Dietmar Woidke and Potsdam’s Mayor Mike Schubert – under the heading ‘A break rather than continuity: what we need is a place of learning, not a place of identification’. We are calling for three changes to the project. Firstly, the removal of the reconstructed carillon with its revisionist, far-right and militaristic inscriptions. Secondly, for no reconstruction of the original decorative weaponry, to symbolically distance the church from its previous identification with Prussian militarism, the right-wing radicalism of the Weimar period, and National Socialism. And finally, changes to the project’s organizational concept that is reviving the unity of church, state and military. The representatives of politics and the military should be replaced by civil society initiatives that campaign for human rights and against militarism and crimes against humanity.